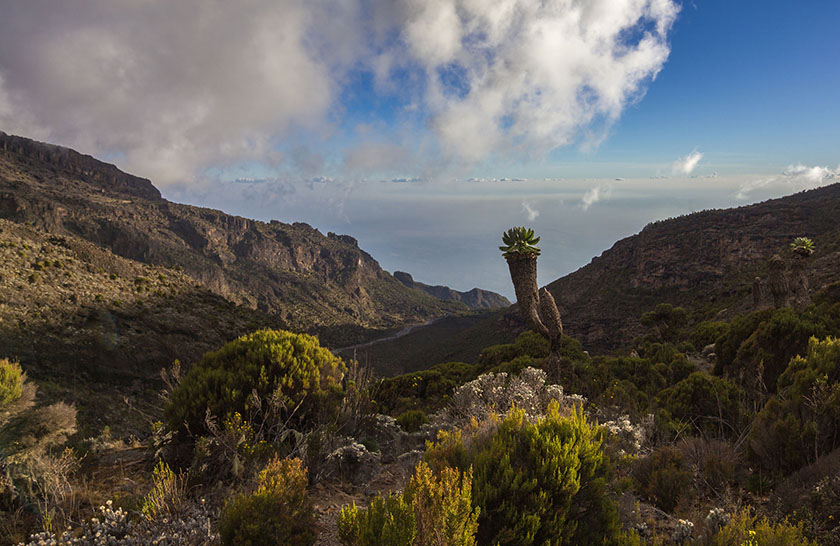 We’ll pick you up from Kilimanjaro Airport and transfer you to a comfortable hotel in Moshi, which is the base town from which you’ll start your big adventure. The next day we will check over your gear to make sure you’ve everything you need and we will talk about your trip (short briefing ) Then you’ll have the chance to get your bearings. Moshi is a bustling, lively town with colorful markets so if you’ve time take a quick look around and then rest your legs at one of the many quirky coffee bars. Don’t be too energetic – you’ll need to save your energy for the tough trek ahead!

Our trek begins on the wilder, western side of Kilimanjaro so you’ll spend part of Day 1 admiring the patchwork fields of the coffee and banana plantations as you’re driven along the south boundary of majestic Kilimanjaro to the Londorossi Gate. After we’ve completed the park entrance formalities, you’ll be driven 12k further through cyprus plantations into breathtaking natural wilderness, resplendent with pristine rainforest where you’ll spot colobus and blue monkeys. There’s even a chance of seeing antelope, elephant and buffalo, which prefer this quieter side of the mountain. You’ll hike through dreamy, misty moss-clad forest, through a soundscape of birdcalls, monkeys tripping across branches overhead, and your own footfalls.

The flora can be breathtaking – the glowing orange of the Fireball lily, the pink and white impatiens, and varieties of hibiscus. You’ll camp at Big tree camp – or Mti Mkubwa – among the African yellow-wood, hypericum and hanging flowers of the hagenia. After a tasty dinner you’ll fall asleep to the sound of the night birds.

It’s an early start today as, after a filling breakfast, you’ll leave the density and closeness of the mountain forest. The trees thin out as your vista opens up to big skies and high heath on your way up towards the Shira Plateau. The moorland you’ll hike through is an almost prehistoric landscape of giant heathers interspersed with groundsel and lobelia. You’ll pick your way over bubbling mountain streams, steep ridges and rocky outcrops and we’ll rest for lunch on the western edge of the Shira Plateau, where you’ll see the Kibo Massif sweeping up to the summit. It may seem so far away now but you’ll get there! After lunch we’ll continue the trek under the glorious African skies with plenty of opportunities for photography. We’ll rest overnight at Shira 1 Camp where you’ll get the chance to relax, gazing as the sun sinks into the clouds below you while you enjoy a scrumptious dinner before a well-earned rest.

Today you’ll wake to azure blue skies – hopefully! – as you’ll seem to be floating above cloud level. After a hearty breakfast you’ll continue your adventure northwards, as the scenery becomes more rocky and barren. You’re heading to the little-used and lonely Moir Camp, definitely and literally off the beaten track, so it will seem that you have the mountain to yourself. You’ll stop to rest and have lunch which will give you the opportunity to listen to the soundscape this side of the mountain – a still hush, or, more likely, the wind whipping round the rocks. After further climbing you’ll enjoy a well-earned rest and hearty dinner at Moir Camp.

After a restful sleep and sustaining breakfast you’ll head off through an obvious volcanic landscape, so rocky and barren that you’ll feel like you’re on the moon. You’ll see the black, glassy obsidian rocks and pebbles, hurled out during eruptions. All the evidence of its violent past is there for you to climb over, around and through. We’ll camp tonight at Lavar tower Camp, where you’ll enjoy a warm, filling dinner and the thought of a lie in tomorrow!

After late breakfast we are going to have acclimatization hike of about two kilometre and it may takes three to four hours. After lunch we can have time to walk around and learn more about lava tower.

We hope you feel rested and rejuvenated after your acclimatization day at the camp, but that doesn’t mean you’ll get an easy day today! An early start and a filling breakfast then you’ll say goodbye to your home for the day. Today’s hike is tough but it makes up for that with its beauty and the opportunity to dig deep into your own character. After negotiating frozen streams you’ll be climbing up the ridgeline which has amazing views – but watch your feet as you’ll be on a loose scree. You’ll be directly below the Western Breach itself, with cliffs and steep drops all around you. It’s an exhilarating landscape and you’ll start to feel that the summit is really within reach. Arrow Glacier Camp has indescribable views and is known for luminescent, astounding sunsets. Kick back, relax, and enjoy the sunset and a filling dinner because it’s early to bed as the temperature drops.

Today’s the day you face the Western Breach – the most difficult of the three summit routes. You’ll start before dawn, strengthened by breakfast, and the climb is easy at first. As the sun rises over the Breach, temperatures will rise and you’ll feel good with the sun warming your muscles. You’ll meet some challenging rocky areas where you’ll have to scramble using your hands, and you’ll be well within the snowline. There are no paths through the Western Breach as the landscape changes all the time, but your guides will select the safest routes. The views are incredible. The Great Barranco Valley spreads out before you with stunning views of the Lava Tower and you’ll be able to look back across the Shira Plateau – remember that? You’ll be invigorated by a feeling of progress which will give you wings. You’ll ascend through a breach (hence the name!) in the crater rim with magnificent views of the isolated Furtwangler Glacier, the last remnant of an ice cap that once covered the summit, and the Northern Icefield. The crater floor is soft volcanic sand, softer on your feet but tougher on your calves than the rocky outcrops before. If you’re feeling strong, our guides might lead you to the Reusch Ash Pit, a 400-foot wide hole in the center of the crater. You’ll know you’re near a dormant volcano by the sulphurous fumes which you can smell as you approach. Otherwise, it’s bed early at Crater Camp – the highest camp in Africa – as you’ve a big day ahead of you tomorrow; the push for the summit itself.

It’s a big day today – the highlight of your adventure! It’s a shorter climb than other summit routes which means you won’t have to rise at midnight to start your climb, so you’ll be

well-rested. It’s the steepest route, well-marked but tough. You’ll be making some of your ascent to Uhuru Peak in darkness and silence, so after a light breakfast it’ll be single file with head torches, taking it slowly and deliberately as you push up the crater rim towards Uhuru Peak. It’s a totally different atmosphere from anything you’ve felt before and as the early dawn lightens the sky to the east imperceptibly, you’ll understand the enormity of what you’re achieving. With the pink and gold of the African sunrise lighting your way, the sky becomes bolder and bluer and you’ll take in the vastness of the views around you. At last you reach the summit of Uhuru Peak itself and you’ll rest there for a short time for photo opportunities and the awesomeness of climbing up on the rooftop of Africa itself. Say goodbye to Uhuru to continue down the trail towards Barafu and the Mweka Camp, traversing almost all the landscape zones in one day – from snowy alpine ridges through moorland and into forest. You’ll still be high and excited from your successful climb and this will get you through today’s tiring downhill trek. But a hot dinner awaits you at the Mweka Camp as you celebrate what you’ve just achieved.

Your final hiking day will take you down through sultry rainforest on a 4 to 6 hour hike, so we’ll make sure you have a good breakfast to fuel the journey. After the windswept silence of the high plains and dusty crater, you’ll enjoy the rustling of the trees and the birdsong and the colour of the blossoms are a contrast to the monochrome landscape of the icefields you’ve just left. It’s a great transition from the other-worldliness of the summit and it might feel strange being back in civilization – as far as rainforest is civilization! It’s time to hold your climbing certificates proudly, and of course, there’s a T-shirt opportunity. We’ll drive you back to Moshi where you can unwind and treat your body to a beer and a swim before your first night in a comfortable bed in over a week

Included in the Prices

Excluded from the Prices

The above list is a guide to what should be taken, little else need be taken – do not overpack. Warm head cover, thick fibre pile or down jacket, light waterproof top, trousers, light overtrousers, mittens, thermal underwear, sweater, warm socks and lightweight inner socks, watertight and well broken in sturdy boots, gaiters, sunglasses, walking poles, sleeping bag (three or four season, if three then a liner is recommended), sleeping pad, water bottle, high factor sun protection cream, small first aid kit, headtorch with extra batteries, toilet roll, small wash kit and a small daypack. A holdall or bigger rucksack to give to your porter with your main luggage. Optional: a hat with a brim.

Tip amounts listed are per group, not per individual traveler. For instance, if 4 people are on Kilimanjaro, they should each contribute US$ 5/day if they want to tip the chief guide US$ 20.

At the ceremony your group might choose to say a few words, sing a song or something else short in order to celebrate the moment. 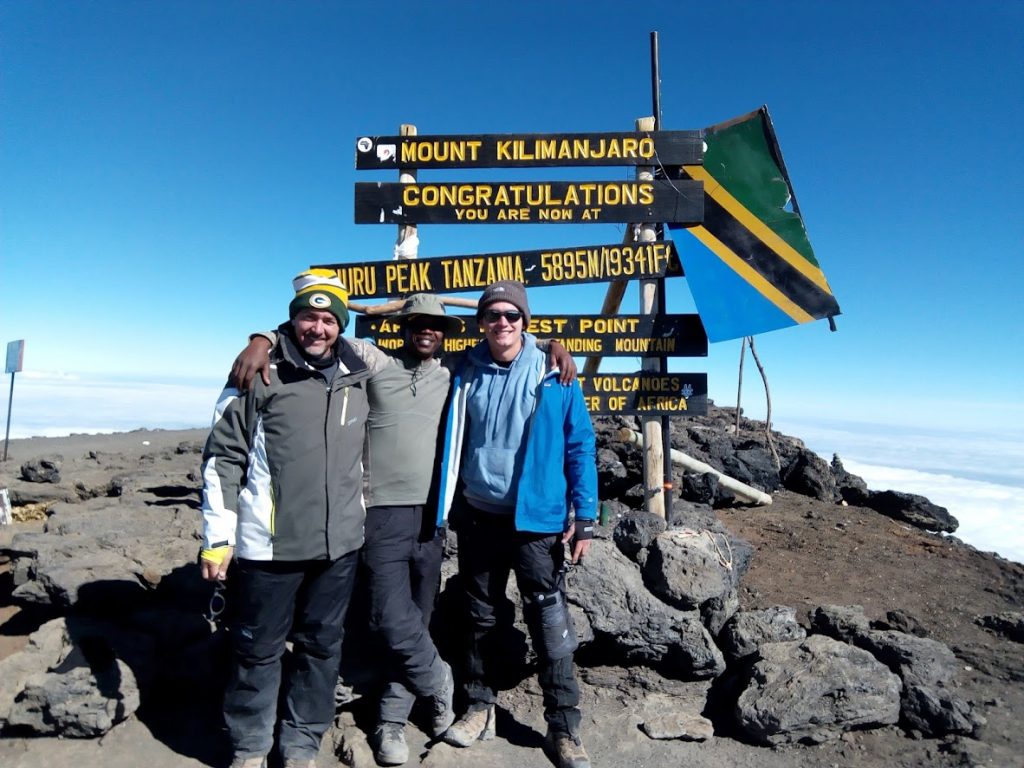 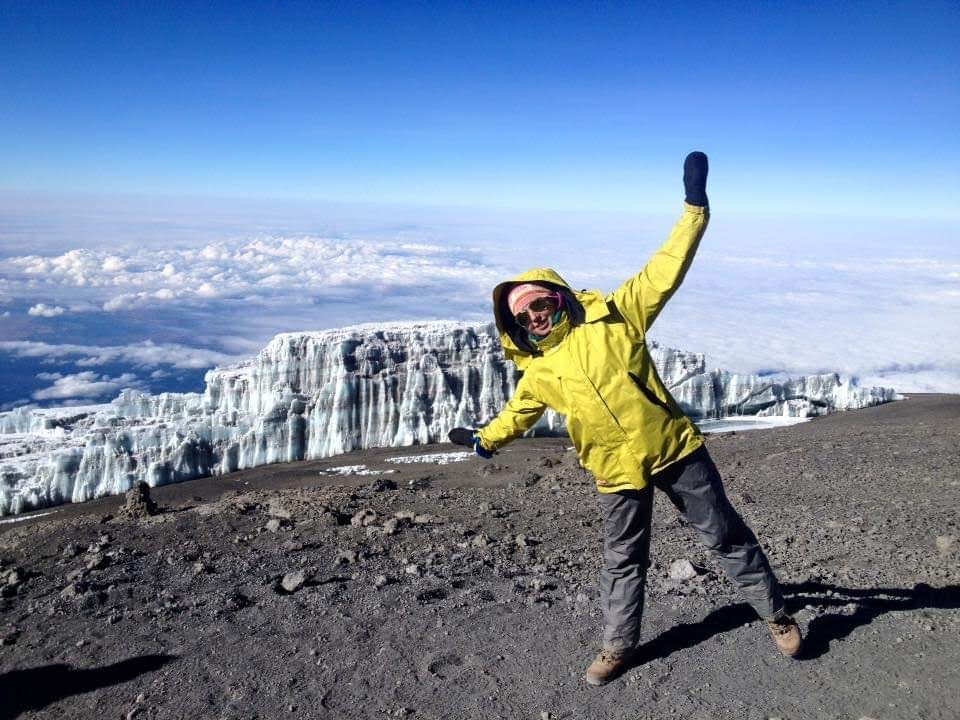 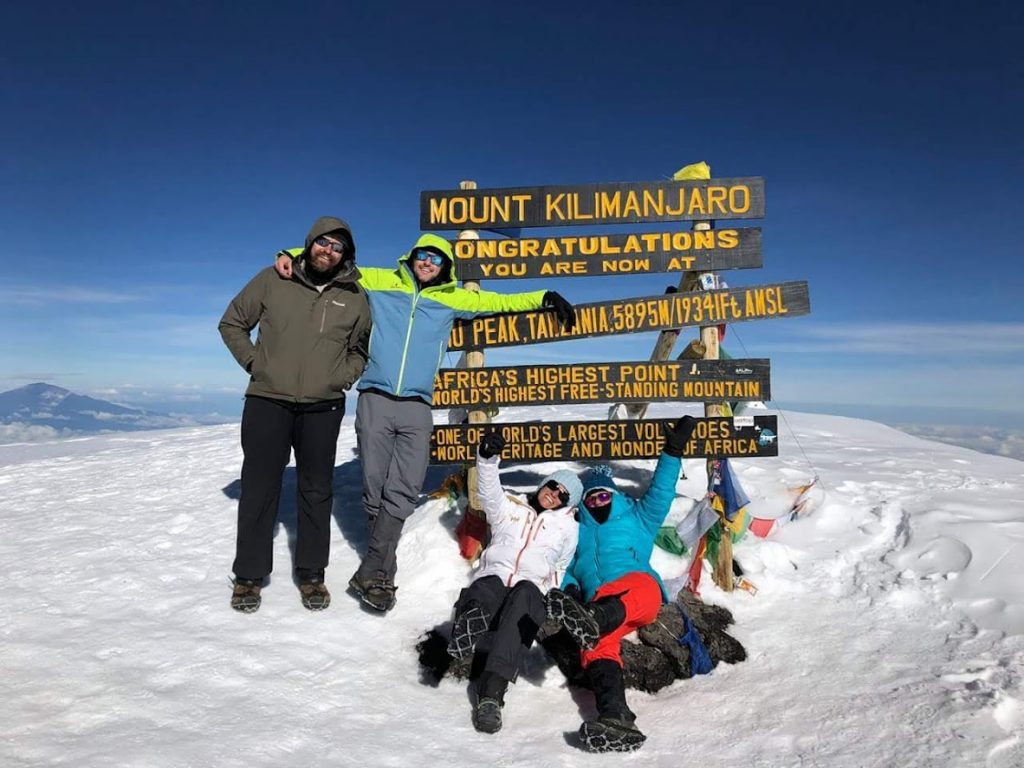 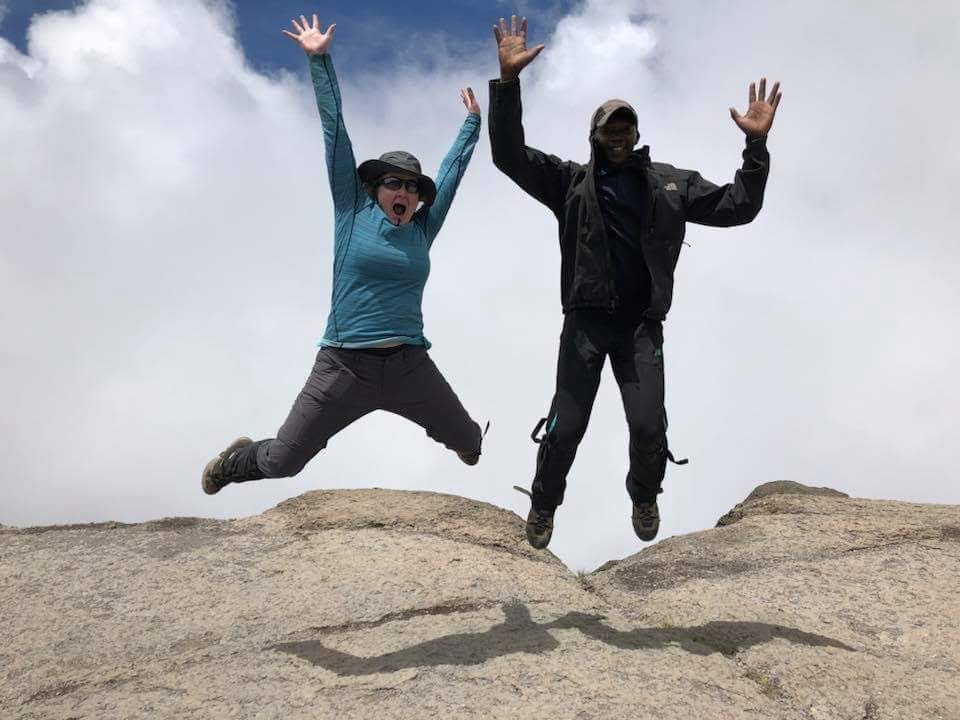 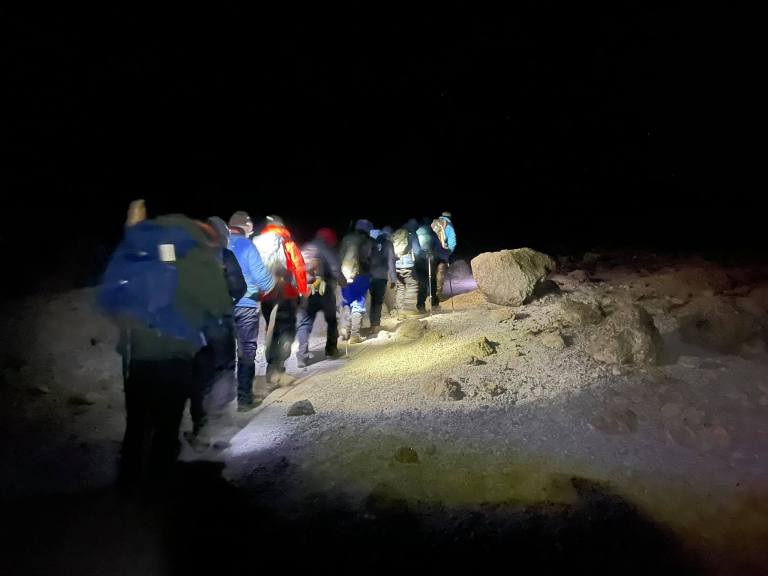 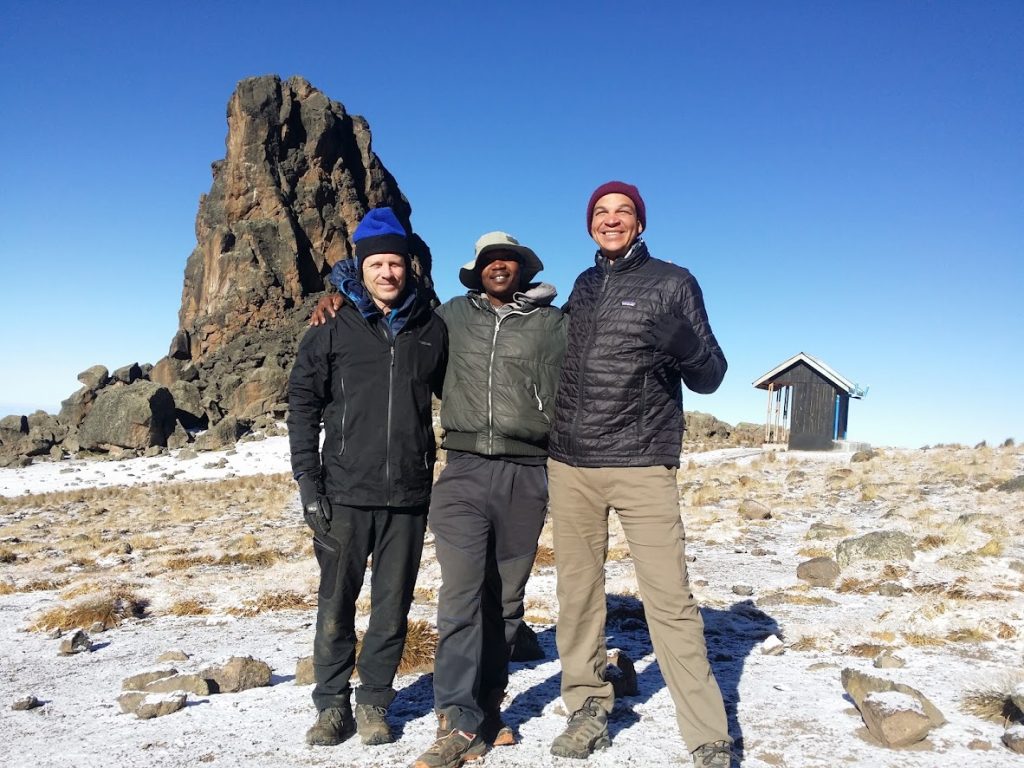 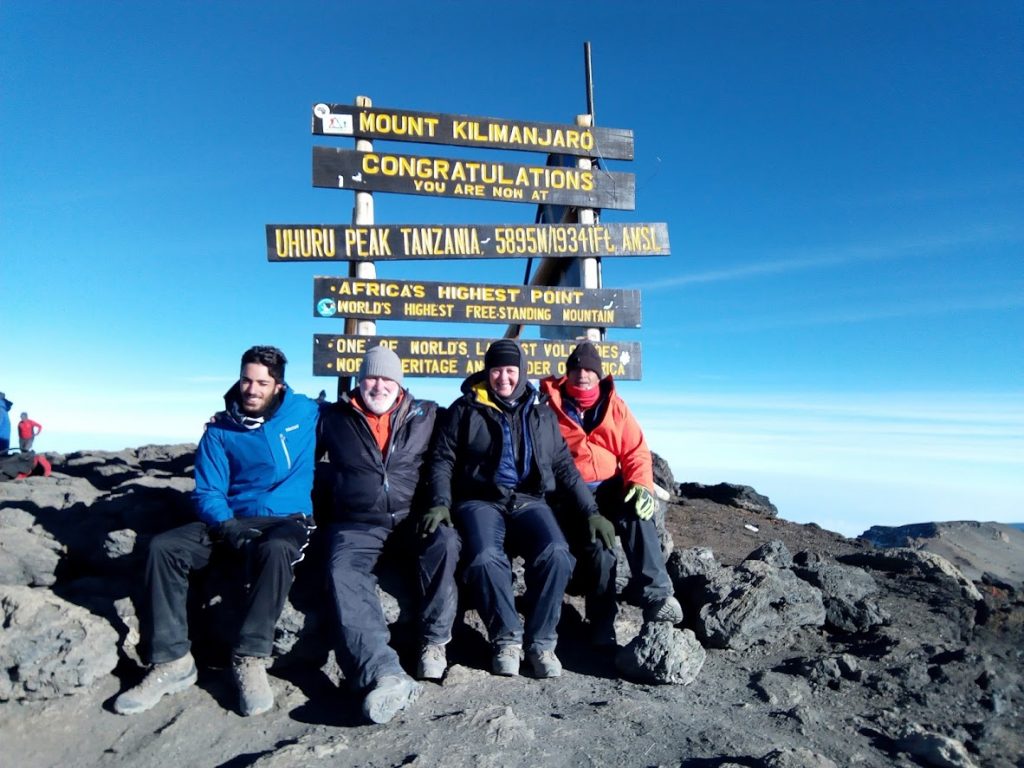 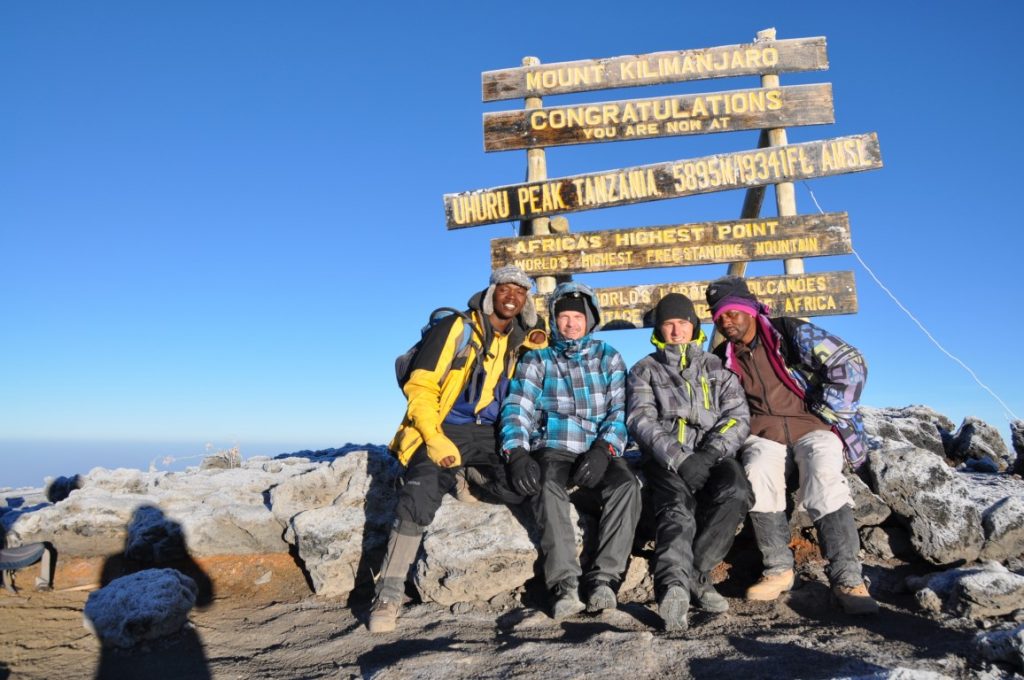 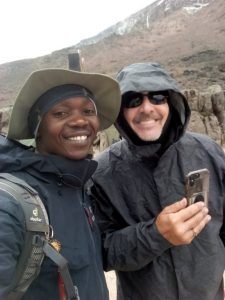 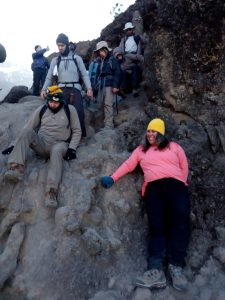 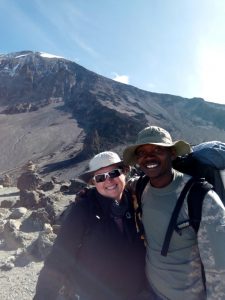 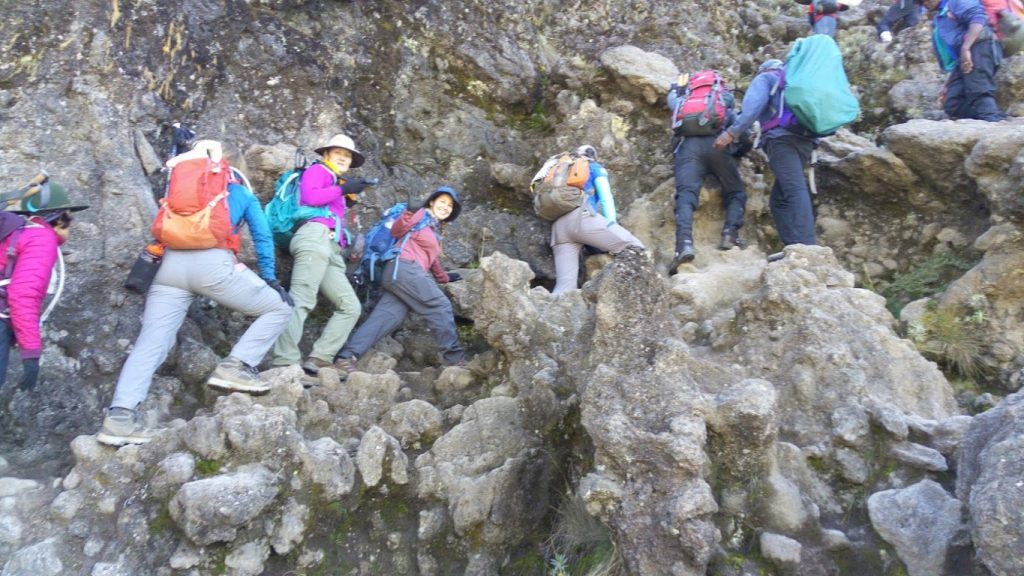 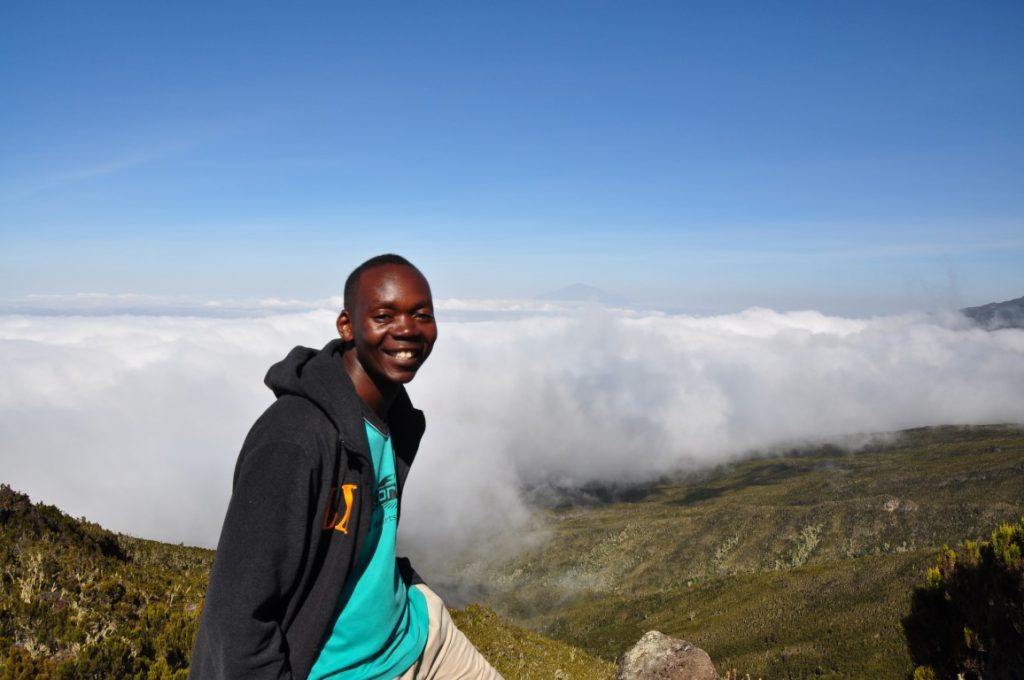 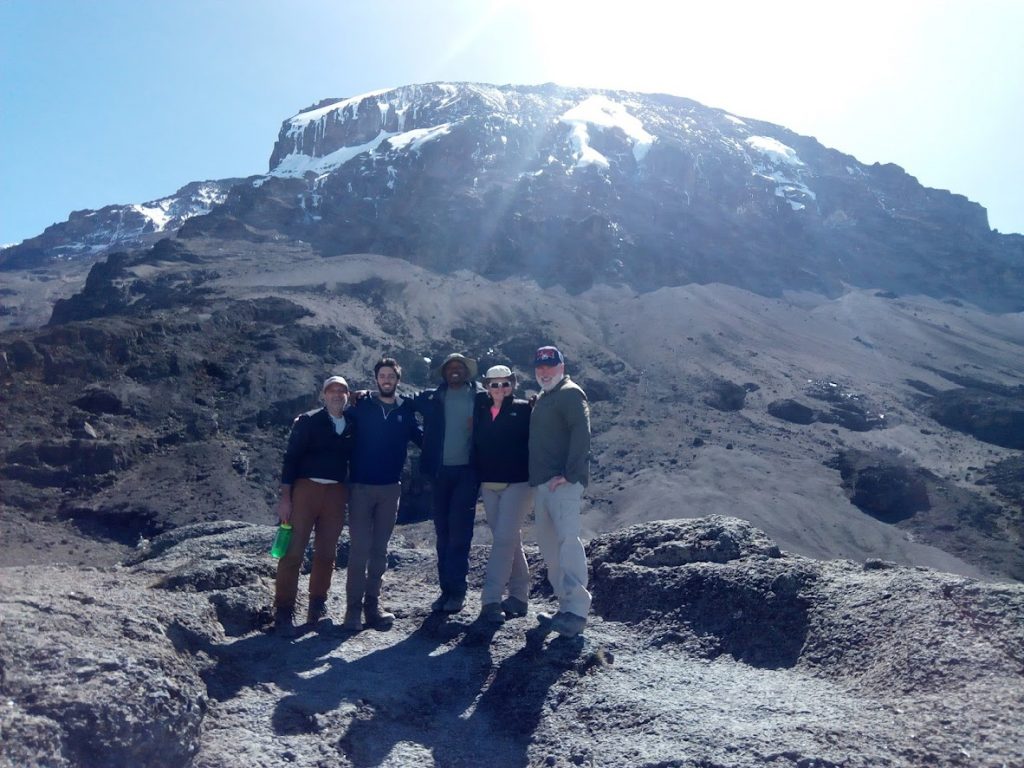 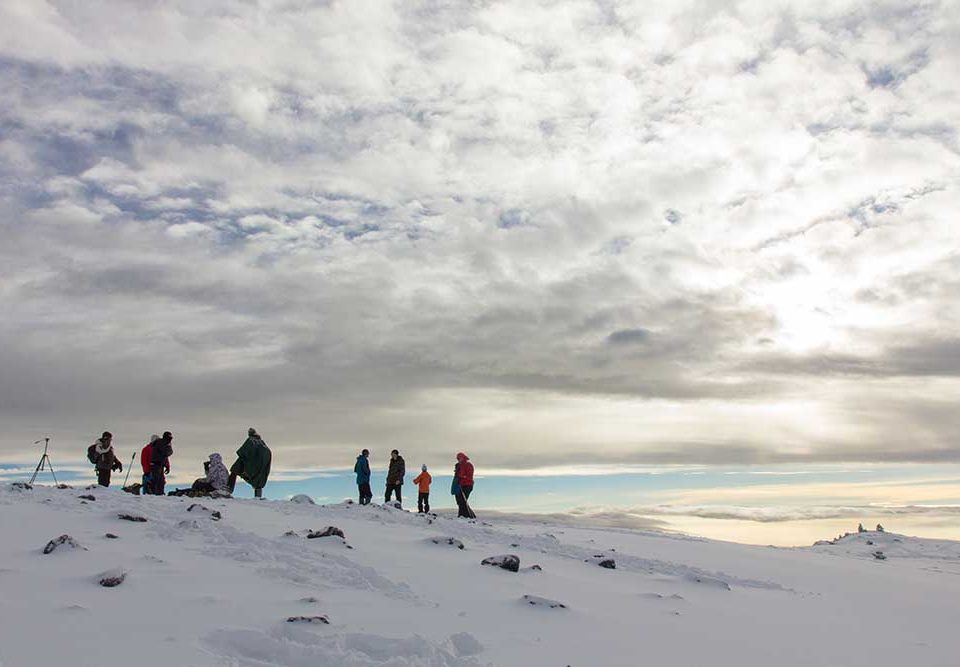 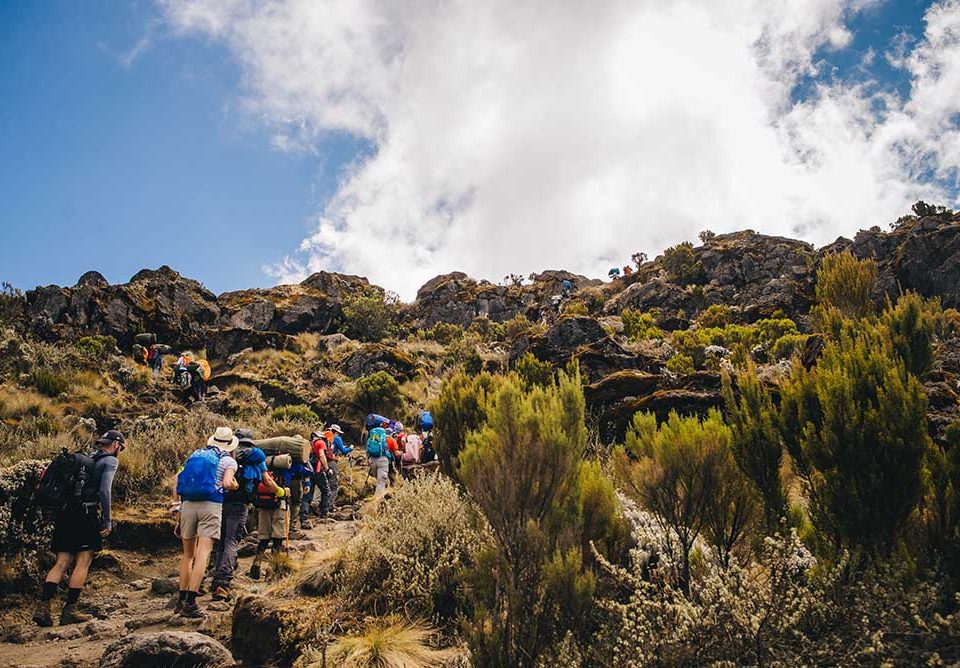 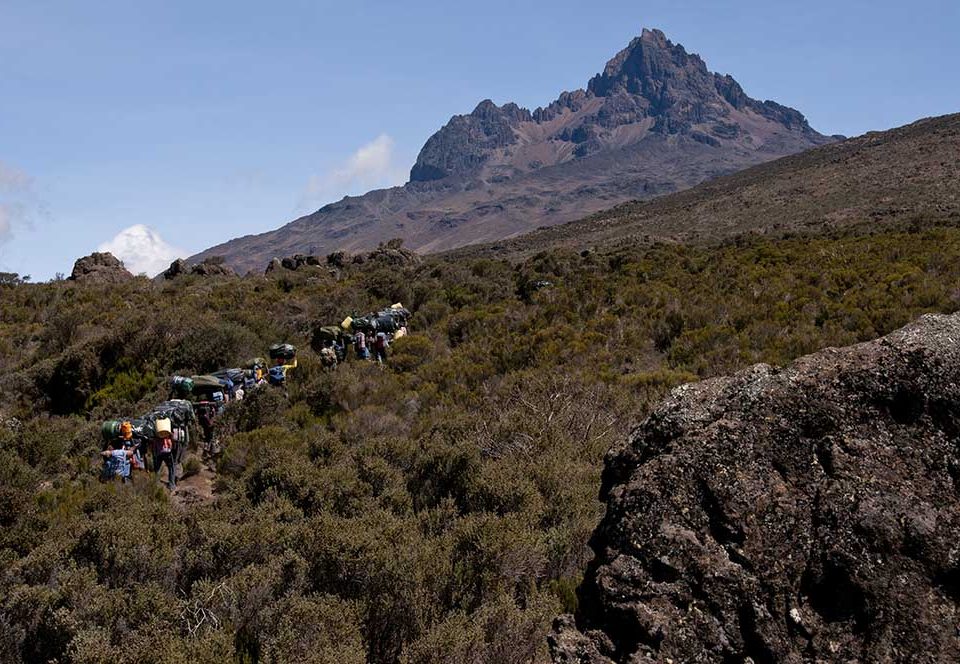